Now that you have hopped on our comfy Green T line we will start our tour. For Bostonians, the T is a widely used resources which takes one all throughout the city of Boston for only $2.40. The T has a total of five lines: Green, Orange, Red, Blue, and the Silver line. For my StoryMap, I will be focusing on the Green line, one of the lines that touches most of the Emerald Necklace while also passing through noticeably different socioeconomic neighborhoods. By utilizing twelve sites, my presentation will look into the history of four stops and how they came about while also analyzing eight sites in the first person perspective. This format allows me to explore how the city of Boston is divided racially, why it is divided in such way, and the notice the socioeconomically-wise physical differences of these neighborhoods. We will begin our tour by getting on the stop Park Street and using the E Green Line to Heath Street, South West. After getting to Riverway, we will go North up to Arlington and then back West by using line B towards Boston College. This will allow us to see the most of Boston and its redlining.

In Boston, there is clear points of redlining in neighborhoods, this can be seen throughout the whole city. Where one may find an abundance of high to high-middle class people is closer to the water’s edge, Downtown. The lower classes will be found more inland. We will look at the Boston Globe Spotlight series when looking at Northeastern University and Boston University and calls them out for having little African Americans in their community of students and not providing them with enough resources for them to proudly represent their own community. These are only a two examples where city of Boston, with its total of 61 universities, has educational bias and therefore redlining.

For purposes of this project, I have chosen the subway stops Park Street, Boylston, and Arlington, and Riverway as sites because they run alongside the Emerald Necklace. These four stops, even though they are near each other, portray different physical characteristics while also showing slight differences in socioeconomic groups. Arlington is composed of expensive commercial businesses, luxurious apartments made for the high-class, and a couple of fancy office buildings. Park Street gets one directly to Boston Common’s most popular area. It is located across the street from major shopping streets that house stores like Primark and H&M affordable to the lower-middle class and the middle class. The Boylston stop offers different entertainment such as the AMC Boston Common 19 movie theater, a couple of restaurants, and a fun night at the Bijou Nightclub. Riverway serves as a link of Olmstead Park and Back Bay Fens where many lower socioeconomic groups can be found. These three parks mentioned compose only half of the Emerald Necklace and Franklin Law Olmstead’s design. By traveling through them you will notice not only the difference in socioeconomic groups but also the difference in park maintenance and the importance the government may give to them.

The city of Boston decided to have a subway system, ran as the MBTA, because it has proven to help civilians travel through the city at a low, affordable cost. Some historical sites chosen where Longwood Medical, Brigham Circle, Museum of Fine Arts, and the Government Center. Stopping at Longwood Medical we will be focusing on the Boston Children’s Hospital, the story of its expansion and what it provides nowadays. Brigham Circle has a rich history in racial conflicts and public housing which can be used as an example of how “government deliberately imposed racial segregation” as Richard Rothstein states in his book The Color of Law. The Museum of Fine Arts, Boston being the fifth largest museum in the United States, has had instances of racism and has been accused of exclusion to minorities, we will discover and learn about the different thigs they have adapted to fix such allegations. The Government Center, built after a city wide economic disaster, is source to judgment because of its unwelcoming physical look; however, it still serves for place of speeches and protests for citizens to raise their voice. These mentioned sites are only a few places where the city of Boston has a rich and complex history. I invite you to see more for yourself and go through all the Green Line stops.

The Green T line serves all socioeconomic groups while also connecting them via 5 distinct sublines. However, this connection does not serve as a method for desegregation in neighborhoods, rather the division income-wise is made more visible throughout the journey. The goal of this StoryMap is to provide insight into how today Boston still faces residential, commercial, and educational segregation by exhibiting the selected stops in first perspective or by comparing its history to nowadays. I hope you enjoy the trip and learn a little bit about the history of Boston! 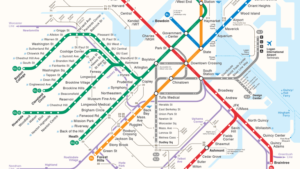 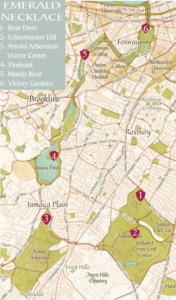 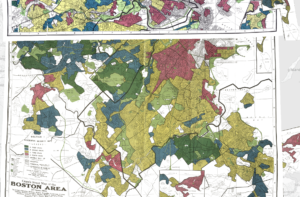 Johnson, Megan. "So You Want to Live in Mission Hill." Boston Magazine 2019.